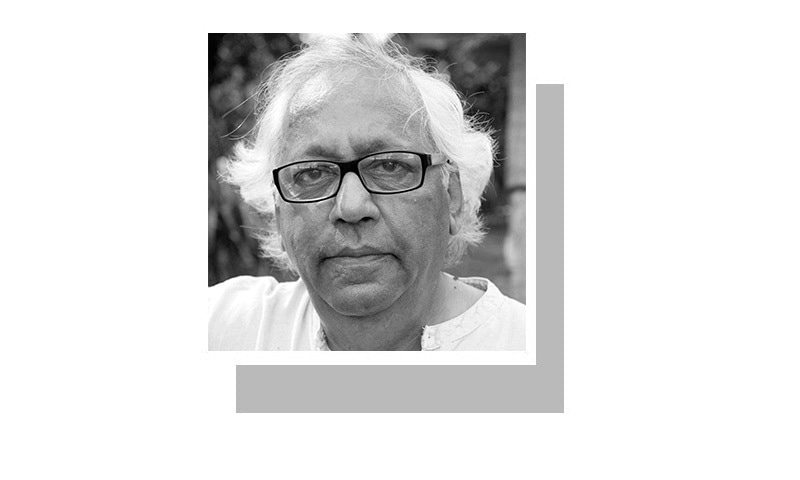 … AND they are off! The front runner has been turbo-charged by the racing club management that has hobbled the next horse. Bringing up the rear is a thoroughbred that has seen better times, but is now way past its peak.

This scenario is what we see from the echo chamber that much of our media has become. But the other day as I was flipping channels, I came across an interesting two-part interview with Dr Ijaz Gilani, founder and chairman of Gallup Pakistan.

I was so fascinated by the facts and figures he discussed that I watched the programme online the next day so I could take notes. Relying on data from all the elections held in Pakistan from 1970 onwards, he made the point that while there had been rigging against the PPP in the 1988 and 1993 polls, it was no longer possible to doctor the results on election day.

Another point Dr Gilani made was that while only 15 per cent of voters were influenced by the personal appeal of leaders, 85pc of them voted for parties. This would seem to minimise the impact of Imran Khan’s undeniable charisma. In terms of personal popularity, Gallup Pakistan’s findings are that Nawaz Sharif leads Imran Khan by 50pc to 45pc.

The figures reveal that we are talking about two Pakistans.

Overall, the PTI’s support has increased from 17pc in the 2013 elections to 25pc in the most recent Gallup poll. In the same period, the PML-N has gone up from 33pc to 38pc. The PPP remains stagnant at around 15pc.

But it is in Punjab that the gap between the two top parties is widest: Gallup Pakistan puts the PML-N far ahead with a 20pc lead over PTI. This difference, if translated into assembly seats, would almost certainly make PML-N the biggest parliamentary party, and therefore in the best position to form the next government. In KP, the PTI’s appeal has risen, while PPP continues to dominate in rural Sindh. Karachi has become extremely volatile, with voter intentions changing from day to day.

When Gallup Pakistan published its forecast before the 2013 elections, placing the PTI far behind PML-N, Imran Khan dismissed the polling organisation as politically motivated. But Dr Gilani’s outfit has been remarkably accurate in predicting the results in 2008 and 2013.

Political forecasters have earned a bad name following Donald Trump’s surprise win in 2016, and the shock victory of the Leave campaign in the Brexit referendum. But in terms of the popular vote, pollsters had Hilary Clinton ahead by a large margin; in the event, she received nearly three million more votes than Trump, only to be defeated in the electoral college.

If Dr Gilani’s numbers turn out to be accurate in the coming elections, what will it mean for Imran Khan? Will we have to endure another five years of destabilising rigging charges, appeals, court cases, long marches and sit-ins? Should Imran Khan fail to achieve his dream of becoming prime minister again, despite all the help he has allegedly received from the establishment, his frustration will know no bounds.

Just as relevant is the question of what a PML-N victory will mean for an establishment that has tried every trick in the book to prevent the party’s victory by a concerted campaign to blacken Nawaz Sharif’s name. But even after he was unseated as prime minister on flimsy grounds, his party remains popular in Punjab. And as we have noted earlier, 85pc of voters cast their ballots for a party, and not a leader.

These polling figures also underline what some of us have said before: allegations of corruption do not greatly influence voters, most of whom look at the performance of local politicians as well as their parties. And here, the PML-N is widely perceived to have delivered in Punjab.

So why this huge gap between the perceptions of actual voters and the chattering classes who inhabit the bubble created by TV chat shows? Dr Gilani has an explanation: according to his data, 70pc of those polled indicate that they are satisfied that Pakistan is headed in the right direction. This is in stark contrast to the media babble about doom and gloom, and how we are in freefall.

Clearly, then, we are talking about two Pakistans here: one comprising around 10pc of the population that consists of the educated middle class with high aspirations, and the vast majority of people who are relatively poor, but who want a better life for their children. Unsurprisingly, it is this second group that ultimately decides the outcome of elections. For them, elections are the only means for their voices to be heard, and they vote in large numbers.

All this is undoubtedly bad news for our political engineers who need to internalise the lessons hard numbers teach us. Wishful thinking, not backed by data and rigorous analysis, is not enough to base strategy on. Luckily, Dr Gilani has provided us with both.

Although Pakistan’s Parliament completes its term in June 2018, the fresh consensus list at best can be used provisionally. In 2017, Pakistan’s parliament had passed The Elections Act 2017. To be in line with international standards, the Act places a limit on constitution variation not to exceed 10pc. For this consensus data needs to be officially published. This is the basic requirement to conduct fresh delimitation. Since there is no such publication, the political parties passed a Constitutional Amendment allowing ECP to use the provisional results. Using this and the Election Rules 2017 duly issued by ECP delimitation process have been underway since beginning of 2018.

Putting aside this technical hurdle that has to be overcome a number of other issues too looms large on the horizon.

Political alignments are undergoing a huge shift. No party seems to have an ideological stance and with PML-N’s legislators defecting, things do not look good for the ruling party. Many ‘electables’ have already ditched PML-N. Most have joined PTI. However, their departure from PML-N ranks for greener pastures is something one often sees with fresh elections looming. Many in PML-N joined the party post 2013 elections and many were earlier members of PML-Q. PML-N had opened its door for all shades of turncoats and now is being paid back in the same coin.

Then there are the independent candidates emerging as victors who can be used to render support to a party. That the party may not be PML-N is a foregone conclusion. The decision of Supreme Court ousting Nawaz Sharif as prime minister and subsequent cases being conducted by NAB are not a good omen for the party.

Provincial, regional, religious and ethnic colours have made the canvas murky. An example was the by-elections of NA 120. Ending up third was the Labbaik Party bagging 7,180 votes, followed by Milli Muslim League with 5,822 votes. Hussain Rizvi, candidate of Labbaik Ya Rasul Allah, managed to scoop 6pc of the votes cast. He campaigned in favour of stringent blasphemy laws. His posters claimed love and admiration of Mumtaz Qadri who killed the then Punjab Governor Salman Taseer. Upon this act, many religious factions declared Qadri a hero. Yaqoob Sheikh winning from Milli Muslim League platform; in 2012 was titled a terrorist by US managed to capture 5pc votes. MML is the political springboard of Hafiz Saeed’s JuD. Mosques were a favourite place of promoting their candidates by these Islamic based parties. Should these parties be made to renounce terrorism and violence in all forms, denounce militancy and de-weaponise and then be allowed to enter mainstream politics?

On face of it — it seems the Parliament will be a hung one. Punjab is stronghold of PML-N. Six MNAs and two MPAs have already left PML-N from Rahim Yar Khan, Bahawal Nagar, Faisalabad, Gujranwala to name a few with the purpose of pursuing the demarcation for South Punjab thereby creating a new province.

With Khawaja Asif’s disqualification for life for holding an Iqama by High Court (IHC) comes a big blow to PML-N and will likely have a negative cascading impact on PML-N leading to more legislators jumping the ship.

So what will happen?

Can PTI garner enough support with the help of extreme rightists, a mix of independents and cobbling together a mix of smaller groups to form a government? Will this group on issues be on the same page or lead to more chaos? How long will it survive? A broth made by too many cooks is bound to spoil.

How different parties manage the voters on Election Day is important as is galvanising supporters to come out to vote.

PPP has reduced itself to a sub-provincial party restricted to rural Sindh. If elections of NA-120 is anything to go by, PPP has very little standing outside of their niche. A most disturbing aspect of NA 120 elections had been the demise of PPP. This was the constituency which largely came under NW-60 in 1970 won by Zulfiqar Ali Bhutto by 78,000 votes. His main contestant was Dr Javed Iqbal, son of Allama Iqbal. In 2017, PPP bagged only 1,404 votes. It ended up last in the race. A sad state for a party that had won the hearts and minds of people under the dynamic leadership of Bhutto.

The question is which of these weak parties manage to get the magical figure of 172 numbers and who will form the 172? Achievement of this goal is one thing, running a government successfully of a motley group of divergent thought processes thrown together is quite another.

It will be a system chaos.

End Note: “Good governance never depends upon laws, but upon the personal qualities of those who govern. The machinery of government is always subordinate to the will of those who administer that machinery. The most important element of government, therefore, is the method of choosing leaders.”

Capital TV; What factors led to the victory of PMLN and defeat of PTI?