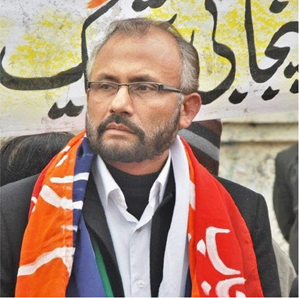 Chaudhry Nazeer Kahut founder Chairman of Punjabi National conference said this in his keynote address
at a function organized in connection with International Mother Language day by the National Youth
Forum at Punjab Institute of Language,Arts and Culture here on Sunday.

He regretted that Chief Minister Shahbaz Sahrif had adopted discriminatory attitude towards the Punjabi
language while English was being made compulsory at the primary level in the province.

He said a movement be launched to protect the rights of the Punjab and Punjabi language to save it from
what he called the conspiracies of the Punjabi establishment,feudal lords,generals and politicians.

He said the Sindhi members of parliament were trying to introduce a resolution in the National Assmebley
and the Senate for the adoption of Seraiki,Ounjabi,sindhi,Pushto and Balochi as national languages.

He urged the Punjabi parliamentarians of PPP,PML-N.PML-Q and other main stream parties to join hands
to support the move only for four mother languages Sindhi,Punjabi,Pushto and Balochi as national
languages but not the Seraiki .As the so called fifth language Seraiki is not a language its mere a dialect
of Punjabi language.And moreover it was an internal matter of Punjab.

He sought the support of the Sindh province to thwart the nefarious designs of the forces wanted to divide
Punjab on the basis of Language and ethnicity,

He said Punjabi be made medium of instruction in all the schools of the province and demanded that
registration of private Schools failing to introduce the Punjabi language be cancelled and more newspapers ,
magazines and books be writted in the mother language.

Later on a rally was taken out from the Punjabi Complex in the Gaddafi Stadium ,to Liberty Chowk to
Create awareness. On the eve of the International Mother Language Day on Saturday.Addressing the rally
Nazir Kahut said said the class system was the root-cause of the downfall of Punjabis and their language.
He demanded that Punjabis should be given their birthright to speak and learn their mother tongue. He of
warned of a movement to protect rights of Punjabis and the Punjabi language.Police stopped the rally from
moving ahead.