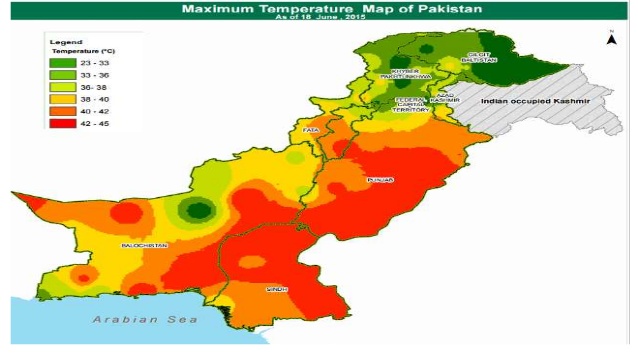 Pakistan recorded one of the highest temperatures in the world – 53.5 °C (128.3 °F) – on 26 May 2010, the hottest temperature ever recorded in Pakistan, but also the hottest reliably measured temperature ever recorded on the continent of Asia.[1][2] As Pakistan is located on a great landmass north of the Tropic of Cancer (between latitudes 25° and 36° N), it has a continental type of climate characterized by extreme variations of temperature, both seasonally and daily. Very high altitudes modify the climate in the cold, snow-covered northern mountains; temperatures on the Balochistan Plateau are somewhat higher. Along the coastal strip, the climate is modified by sea breezes. In the rest of the country, temperatures reach great heights in the summer; the mean temperature during June is 38 °F (3 °C) in the plains, the highest temperatures can exceed 47 °C (117 °F). In the summer, hot winds called Loo blow across the plains during the day. Trees shed their leaves to avoid loss of moisture. The dry, hot weather is broken occasionally by dust storms and thunderstorms that temporarily lower the temperature. Evenings are cool; the diurnal variation in temperature may be as much as 11C to 17C. Winters are cold, with minimum mean temperatures in Punjab of about 4 °C (39 °F) in January, and sub-zero temperatures in the far north and Balochistan.