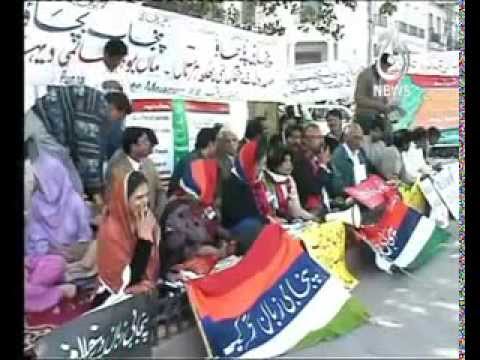 Punjabi Language Movement Protest Rally in Lahore
Punjabis’ legal, democratic rights ‘being usurped’
LAHORE, Feb 20: Constitutional, moral, legal and democratic rights of the Punjabi people are being usurped by the establishment, putting the integrity of Punjab in danger.
“Anti-Punjabi language forces within the establishment and anti-Punjabi mindset of the rulers are hampering enforcement of Punjabi as official, academic and legal language in Punjab,” said Punjabi Language Movement convenor Chaudhry Nazeer Kahut at a rally near Shimla Pahari on Sunday.
“The 150 years old undeclared and unofficial ban on basic education in mother tongue in Punjab be abolished and systematic cleansing of Punjabi language in Punjab be stopped. Punjab wants its mother tongue back. Punjabi children should be given basic education in their mother tongue just like the children in rest of the world.The official discrimination against the mother tongue of 100 million people of Pakistan should be stopped immediately,” said a charged Kahut.

Wasim Akram – The Sultan Of Swing

10 best tips for dog owners you will read this year

Who else wants to know the mystery behind water?